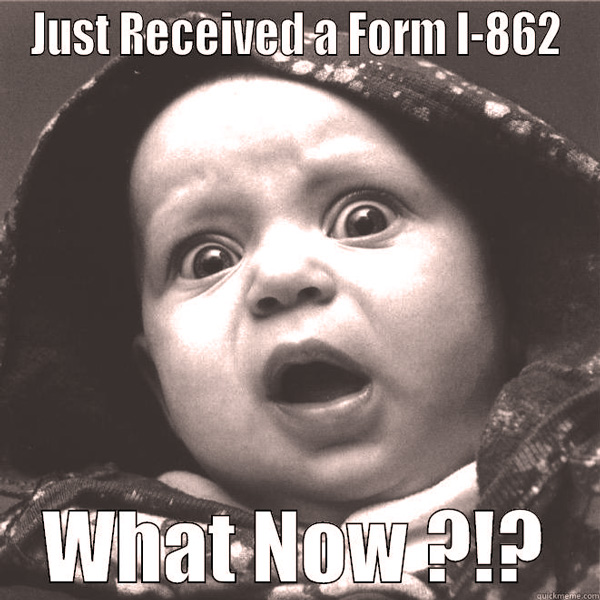 This week, we return to our discussion about the ins-and-outs of immigration court proceedings. Last time, I discussed the various ways that people are “thrown” into removal proceedings. Today, I take a closer look at the Form I-862 Notice To Appear.

The Notice To Appear (or “NTA” for short) is issued by the Department of Homeland Security. (View a sample version of this form.) It is the “charging document” that contains important information: the name of the Respondent (the foreign national facing deportation), the Respondent’s last known address, and the file number (which usually corresponds with the Respondent’s alien registration number). Due process is one of the hallmarks of the American justice system, and the NTA provides a Respondent with the notice that the Department of Homeland Security wishes to deport him or her and also describes the date, time, and location of the tribunal where the Respondent has an opportunity to challenge those assertions.

The NTA lists the factual allegations (beginning with “You are not a citizen or national of the United States”) that the Department of Homeland Security believes are the basis for a foreign national to be deported from the United States. For instance, perhaps somebody entered the United States with a visa, but remained after the period of time authorized by the government. Or, a lawful permanent resident may have suffered a conviction for a crime that the Department of Homeland Security believes is a “deportable offense.” Below the factual allegations are the specific sections of the Immigration and Nationality Act that the government charges that the Respondent has violated.

At some point during the process, the Immigration Judge will inquire of a Respondent how he or she wishes to respond to the charges. These are known as the “pleadings.” If you are represented by counsel, that lawyer can enter pleadings on your behalf. Think carefully about the pleadings. Once they have been entered (either by the Respondent or by the attorney), it is very difficult to change or amend the pleadings.

Because the NTA is such a pivotal part of Immigration Court proceedings, this will not be the last time you will be hearing about it. But a few cautionary words about the address: all non-US-citizens are required to notify the Department of Homeland Security of any change of address, and all Respondents are also required to notify the Immigration Court of any changes of address.

The following is a list of very bad ideas:
(a) providing the government with an incorrect address,
(b) moving without informing the Department of Homeland Security or the Immigration Court, and…
(c) giving a friend’s address.

Perhaps the idea is “you can’t deport me if you can’t find me.” However, the Immigration Court mails its notices to the address they have on file. If it is incorrect or invalid, a Respondent may not know that a hearing has been re-scheduled because he or she may not have received the notice. A Respondent who fails to appear in immigration court may soon find himself or herself as the recipient of a “removal order issued in absentia” (the equivalent of a “default judgment”). And then, sooner or later, the Department of Homeland Security will seek to enforce that removal order.

If you or someone you know has received a Notice to Appear and would like to discuss how to avoid a removal order issued in absentia, I invite you to contact me.