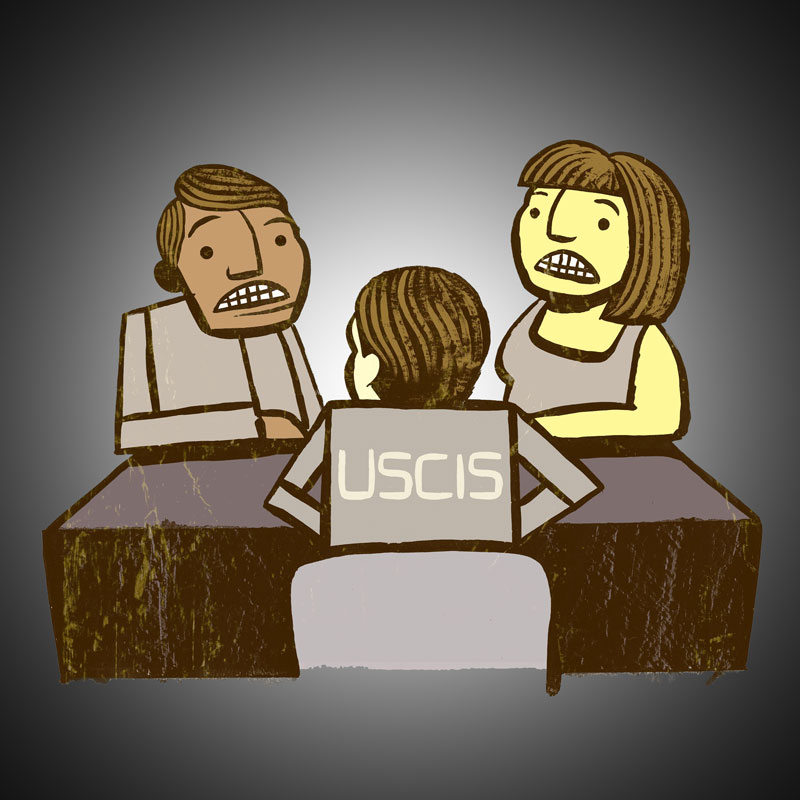 The other night, I was watching the tele with my wife.  As regular readers of this blog know, that means I was watching one of my wife’s shows again.  On a recent episode of “Trophy Wife,” Kate (played by Malin Akerman) discovers that her marriage paperwork didn’t go through and she’s in danger of being deported . . . to Canada!  (If you haven’t watched it yet, be advised that spoilers are ahead.)  Now — I’d like to compare the Hollywood marriage interview experience to reality.

Hollywood:  Kate wants to change her name and she goes to the City Clerk’s office.  The guy at the window tells her that her name change request is denied because she’s in the country illegally.  After Kate protests, the guy at the window hands Kate a piece of paper and then says that an INS interview has been scheduled for her to prove the legitimacy of her marriage.

Real life:  First, the local City Clerk has nothing to do with immigration enforcement.  To get married in California, you do not need to be a resident of California, nor do you need to be a U.S. citizen. See San Francisco’s County Clerk page and Los Angeles Registrar-Recorder/County Clerk’s marriage license page.  For those of you who want to elope to Vegas, similar rules.

Third, USCIS does not tell you when you can expect a visit from the investigators, as that would defeat the purpose.  They just show up unannounced.

Hollywood:  The agent shows up at Kate and Pete’s home, sits down in the living room, and starts asking them questions about their marriage.

Real life:  This interview usually happens in a very small room in a federal building.  The officer sits across from the couple and takes copious notes.  Sometimes, the officer will read the penalties for committing marriage fraud (imprisonment and fines) and then ask the couple if they still want to go forward.

Hollywood:  Agent asks “How long have you been living with the alien?”

Real life:  USCIS officers don’t generally refer to the non-citizen as an “alien;” they usually say husband or wife.  But otherwise, this is a legitimate question.  Couples might not remember the exact date they moved in together, but they generally keep track of how long they’ve been tolerating each other’s weird quirks.  (My wife, who likes things clean, has been putting up with my habit of leaving the dishes overnight since we met.)

Hollywood:  Agent asks “What side of the bed do you sleep on?”

Real life:  I have seen this question asked during an interview.  I usually have the officer specify the vantage point (e.g. are you standing at the foot of the bed, or at the top of the bed?).  Sometimes the officer will draw a bed with the pillows on top and then ask the question.  (I sleep on the wrong side of the bed, because my wife is always right.)

Hollywood:  Agent asks “What is the amount of your husband’s weekly paycheck?”

Real life:  If a bona fide couple has a joint bank account that they both use, the answer to this question is very easy.  (In my experience, it seems that the wives are usually the ones that run the household finances and so they know EXACTLY how much comes in, how much goes out, and the billing due dates.)  (My weekly paycheck is . . . not important.  My wife knows the answer.)

Hollywood:  Agent asks “Is your microwave stationary, or does it have a revolving plate?”

Real life:  I’ve never heard this question asked before, but it’s a good one.  I think I’ll start asking my clients this one.  (Ours has a revolving plate.)

Hollywood:  Agent asks “Where is your bathroom?”  Kate says “Oh, I know this one, there’s one down the hall and one in the bedroom.”  Agent says “that wasn’t an official question, I need to use your bathroom.”

Hollywood:  Everyone in the family shows up in the living room while the interview is going on and things get chaotic.  Pete and Kate bring order to the cosmos.  Agent says “this is clearly not a marriage of convenience because nothing about it is convenient.  Congratulations!”

Real life:  USCIS officers usually say one of two things: (a)  “I’m going to recommend your case for approval” or (b) “We’ll let you know if we need any additional information.”  Option B is usually code for “you’re going to get an unannounced visit from the investigators.”  However, I have seen some officers send us away without making a final decision, but the approval comes in the mail a few days later.  So, Option B is not always bad.  (I think my wife and I would pass USCIS muster.  She would probably be happy to see some of my boring socks deported.)

By the way, what is it with Hollywood’s fixation on deporting wives to Canada?  Wasn’t that where Sandra Bullock was headed if she didn’t prove that her marriage to Ryan Reynolds was bona fide in “The Proposal.”   Hmmm, that might be a future Hollywood versus real life blog.  Double hmmm, Malin Akerman was in that movie too.

If you would like to speak with me about your immigration questions, you may contact me.  Or we can talk about my wife’s current crop of shows on the DVR:  Revenge, Game of Thrones (probably not going to be any green card issues in that show . . . seems like if the Lannisters don’t like you, you don’t end up deported, you end up dead), Grey’s Anatomy, Private Practice, and Agents of S.H.I.E.L.D. (be interesting to see green card issues in that one . . . maybe Director Fury oversees a naturalization ceremony someday).