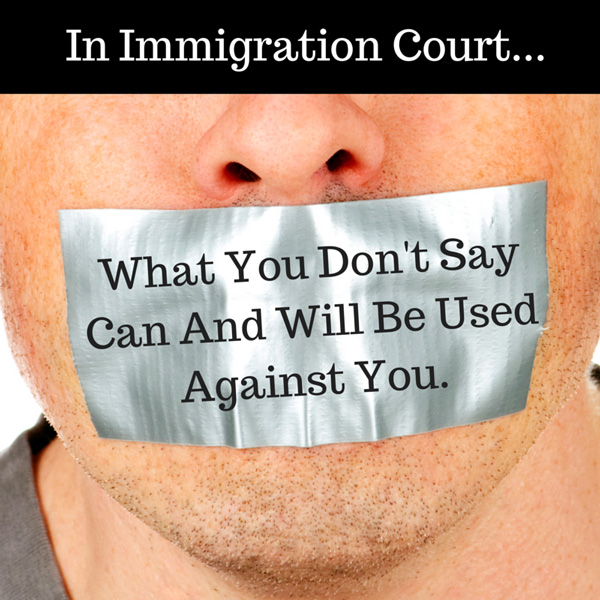 In Immigration Court, What You Don’t Say Can And Will Be Used Against You

The Board of Immigration Appeals recently determined that a seemingly non-immigration-related document can be used as evidence by the Department of Homeland Security to support its deportation case. The case is called Matter of Bett.

The immigrant in this case sought to obtain a green card based upon an approved petition from his United States citizen wife. However, the government charged that he was not eligible for “adjustment of status” because he falsely claimed to be a United States citizen on two separate occasions. To support its charges, the government relied on two different Employment Eligibility Verification forms (known as the “I-9″) on which the boxes indicating that the applicant is a citizen of the United States had been checked.

The immigrant testified that he was “not sure” if he completed the I-9 forms and that he did not remember if he checked the box attesting that he is a US citizen. Asked specifically about checking the citizenship box, he testified “I don’t think I did.” He argued that he may have left the box unchecked, but that employers “might be motivated to check the citizenship box on the applicant’s behalf because it would allow them to procure workers.” However, the Immigration Judge and the Board of Immigration Appeals came to the opposite conclusion: although the immigrant could not specifically recall if he checked the box, there were other aspects of his testimony and other pieces of evidence that supported the notion that the immigrant would have checked the box because he wanted the jobs. As a result, the judge denied his application for a green card and instead ordered his deportation.

The quick take-aways and lessons from this case:

If you or someone you know would like to discuss valid and non-fraudulent ways to obtain employment authorization, I invite you to contact me.