The attorneys at Fong & Aquino are often asked whether using a re-entry permit “guarantees” re-entry to the US after a prolonged absence. A lot of people seem to think that there is some guarantee that using the re-entry permit will ensure their safe return to the US. In most cases, this is true, but it’s important to remember that the Customs and Border Protection (CBP) can and now will often still interrogate returning permanent residents about their reasons for leaving the US for long periods of time, most especially, those trips outside the US that are more than 6 months.

Using a re-entry permit allows a permanent resident to ask for re-entry to the US, but it only ensures that the CBP cannot use the length of absence as the only reason for denying entry. If CBP finds that a person holding a re-entry permit may have been employed abroad, or took up formal residence abroad, CBP can refer an individual for removal proceedings or deferred inspection when CBP will conduct a more formal interview of the applicant for re-admission. This will give you, the applicant a chance to rebut any allegation that you have abandoned your US permanent residency. If you are facing an abandonment interview with CBP, you will have one chance to show that you are eligible to keep your status. Contact the attorneys at Fong & Aquino if you would like a consultation regarding your case. —ecf 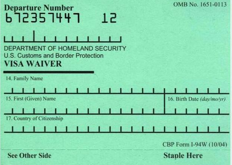 The US Department of Homeland Security (DHS) has said that it will start phasing out use of the I-94W Arrival-Departure Card. Immigration lawyers at Fong & Aquino have been practicing law a very long time, and the I-94 is a venerable old immigration law fixture. It appears that DHS has decided to attune to the times, automating the gathering and review of biographic information about persons entering on the Visa Waiver program.

The Visa Waiver program allows nationals of certain countries to enter the USA without a visa, provided the entry is for touristic or non-employment business reasons. In the past, Visa Waiver entrants had to fill out the green I-94W card and present that card to a border guard at the Port of Entry (POE). Over a period of time, DHS will phase out the use of the I-94W, and a Visa Waiver entrant will simply show a passport at the POE, be photographed and fingerprinted, and then the passport will be franked (stamped). This new arrangement is similar to the pre-arrival gathering of information used by Australia’s “electronic visa” system. –jcf

“What’s the difference between my visa and the I-94 landing card?”

The immigration lawyers at Fong & Aquino in Los Angeles get this type of question all the time. Let’s see if we can’t explain this.

END_OF_DOCUMENT_TOKEN_TO_BE_REPLACED 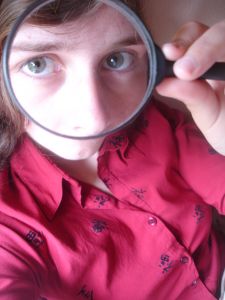 In our blog of yesterday, 1 April 2010, we mentioned the new screening procedures at US ports of entry (POE). Fong & Aquino’s clients travel a great deal, passing through Los Angeles and other immigration ports of entry. As lawyers to so many travelers, we try to provide accurate information about border issues. We have learned a little more about the new screening protocol.

In the past, all citizens of certain countries believed to be supporters of terrorism would all be scrutinized indiscriminately. Cuba, Iran, Iraq, Pakistan, Saudi Arabia, Somalia, and Sudan are widely believed to have been on this list of soi-disant unfriendly countries. Citizens of other countries — perceived as “friendly” to the USA — would be subject to less scrutiny.

END_OF_DOCUMENT_TOKEN_TO_BE_REPLACED

The Barack Obama Administration recently announced that border guards at United States Ports of Entry (POE) will begin screening aliens arriving from certain countries based on specific information about threats to the USA. The immigration attorneys at Los Angeles’ Fong & Aquino immigration law firm are advocates for national security balanced against sensible protections for civil rights. We hope this change will reduce the number of unwarranted, unreasonable, and (usually) unfriendly challenges to certain arriving visitors.

Since the New York terrorist attack in September 2001, the USA has maintained a list of approximately fourteen countries (the so-called “group of fourteen”) which are considered to encourage state-sponsored terrorism, or which are believed to provide assistance to terrorists. The US would not even officially name the specific countries, or confirm the exact number of countries, on the list. All citizens of one of these countries — of any gender, any age, any social class, any educational level, for any reason — would be subjected to additional interrogation by US Border Guards.

The newly-announced change sets up a system which uses intelligence information and threat assessment — about specific persons, specific targets, and specific descriptions, to identify passengers who might have a link to terrorism. Quite properly, those persons would be subjected to additional scrutiny. Others who do not meet the more reasoned threat profiles would be allowed to enter the USA in the way of other visitors.

END_OF_DOCUMENT_TOKEN_TO_BE_REPLACED

The citizens of some countries are allowed to enter the USA as touristic or business visitors without first obtaining a B-1/B-2 visitor visa. As Los Angeles immigration lawyers, Fong & Aquino often receives questions about whether a particular country is eligible for this Visa Waiver Program (VWP).

Today, the US Department of Homeland Security announced that citizens of Greece are now eligible to enter the USA as visitors, using the VWP. Eligibility for the VWP is based on a country’s compliance with security and data-sharing requirements–such as law enforcement and security-related data sharing with the United States; timely reporting of lost and stolen passports; and maintenance of strong law enforcement, counterterrorism, border, aviation, and document security protocols. In turn, citizens of Greece will be permitted to travel to the United States for up to 90 days as visitors without first obtaining a visa.

Any Greek citizen that wishes to enter the USA as a visitor using the VWP must first register him/her self under the US government’s Electronic System for Travel Authorization (ESTA). This registration must take place prior to boarding any flight to the USA. Information about ESTA is available here. –jcf

The powerful earthquake that hit Chile moved the entire city of Concepcíon, Chile 3 meters to the west! When such a natural calamity strikes a particular country, the immigration lawyers at Fong & Aquino in Los Angeles receive many calls and e-mails from citizens from that country about the possibility of staying in the USA, because of the problems back home.

The US government sometimes permits citizens from that country to remain in the USA — even after their visas or landing permits have expired — due to the emergency circumstances in the home country. This designation — which is called Temporary Protected Status (TPS) — is made by the US government. At the present time, Chile has not yet been designated a TPS-eligible country by the US government.

END_OF_DOCUMENT_TOKEN_TO_BE_REPLACED

Chile: an 8.8 magnitude earthquake hit Chile today. Lasting 90 seconds it was 500x more powerful than the one that shook Haiti. Tsunami warnings and alerts are now in place from South America to Asia and throughout the Pacific. Evacuations have already begun in Hawai’i. Fong & Aquino sends a message of hope and support to our Chilean clients who may have relatives or loved ones in the country.

Like Haitians present in the United States after the devastating earthquake in their home country, Chileans in the United States may soon be eligible for “Temporary Protected Status” or “TPS” if Congress designates Chile as a country where nationals cannot return safely because of dire conditions impacting the country. Haiti was designated a TPS country on January 21, 2010, only nine days after the January 12 earthquake.

Travel back to Chile may be impossible for quite some time, however those who have H-1B1 or other temporary visas, and who want to travel to the country in the weeks to come should review the Department of State website for all warnings on travel conditions.

END_OF_DOCUMENT_TOKEN_TO_BE_REPLACED

All immigration law attorneys must deal with foreign countries, unique international legal issues, and some quaint interpretations of law. The lawyers at Los Angeles’ Fong & Aquino are no exception, and in fact, this recent change affects some of our clients who do business in or own businesses in the Commonwealth of the Northern Mariana Islands (CNMI).

On 28 November 2008, “the United States” as defined for purposes of the Immigration & Nationality Act (INA) just got bigger, with the addition of the Commonwealth of the Northern Mariana Islands. Although there are probably wrinkles I have not yet read in the treaty, this essentially puts the CNMI on the same footing as Puerto Rico. Here’s the cute part:

Because the CNMI will become part of the “United States” as defined by §101(a)(38) of the INA, “residence or presence in the CNMI before 28 November 2009 shall NOT be considered residence or physical presence within the USA for INA purposes. Thus, on 29 November 2009, all persons physically present in the CNMI are considered “to be present in the United States without inspection, by operation of law.”

END_OF_DOCUMENT_TOKEN_TO_BE_REPLACED

We at Fong & Aquino in Los Angeles believe in keeping the USA safe; however, we are also aware that many security measures can be a burden. As immigration attorneys, we are alert to security mechanisms which may violate the civil rights of immigrants and visitors.

We have recently recently received a report — which we have not yet been able to verify — that the Philadelphia, Pennsylvania and Newark, New Jersey ports of entry are conducting retina scans on arriving non-Americans and non-Legal Permanent Residents. This is in addition to the fingerprints that are routinely taken from all US visitors.

There may be other ports of entry using the retina scan, and we would appreciate hearing from anyone who knows which other POEs are using such scans.