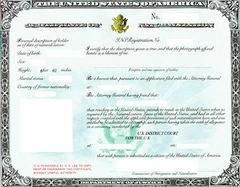 Immigration law firms like Fong & Chun, even though we’re located in Los Angeles, often get embroiled in international politics. There has recently been controversy about whether US Citizenship & Immigration Services (USCIS) would put “TAIWAN” as the country of former citizenship on US Naturalization Certificates.

Because the US Government recognizes the government of the People’s Republic of China to be the “government of all of China,” including Taiwan, some CIS employees have unilaterally insisted on putting CHINA on the Naturalization Certificates of new citizens who emigrated to the USA from Taiwan.  This controversy has been resolved

Chapter 22 of the US Code, section 3303 provides that Taiwan is considered a SEPARATE country for purposes of US immigration law. As a result, this clarifies that the use of TAIWAN on Certificates of Naturalization or Citizenship is acceptable.